How To Manage Dementia Sufferers With Anxiety or Depression

It's not easy – or simple – or straightforward.

Mr R. is a 70-year-old married man, who retired from his job as a teacher 8 years ago. Mr. R. enjoyed an active retirement, which he spent travelling with his wife, visiting museums, and exercising. However, over the last 2 years, Mr. R.'s wife noticed that he became progressively less interested in leaving home; when she asked him to do things he formerly enjoyed, such as going out for dinner or a movie, he became irritable. Normally a well groomed man, Mr. R. started neglecting his hygiene, showering only once a week over the last 2 months. Mr. R.'s wife also noticed that he was becoming increasingly forgetful, missing medical appointments or failing to take his medications. As a result, his wife began providing him with medication and appointment reminders. More recently, he also started having difficulty using his laptop and the TV remote control. Once or twice a week, he has a night where he sleeps only 1-2 hours. On these nights his wife says that he paces the hallways, going in and out of different rooms in their house. He appears unusually anxious and confused, but is unable to tell his wife why he is anxious, or why he is wandering in and out of the rooms. A few times during these episodes, Mr. R. has asked his wife for his car keys, saying he wants to go to a local coffee shop. When Mrs. R. tried to explain that it was too late and the shop was closed, Mr. R. became very agitated, yelling and threatening her. Mrs. R. has been worried that Mr. R. may wander out of the house at night, may start driving, or may do something dangerous such as leaving the stove on. Mrs. R. has been feeling exhausted as she now tries to wake up several times during the night to make sure Mr. R. is in bed. Mr. R. takes medications for enlarged prostate, high blood pressure and high cholesterol, but these medical issues are well controlled.

Please Read This:
How To Make Feeding Dementia Sufferers Easier

Dementia is defined and recognized by decline in cognitive function relative to an individual's established baseline. Additionally, dementia is characterized by a progressive loss of functional independence - an individual's ability to carry out typical, day-to-day activities without assistance from others, such as dressing, preparing meals, and keeping appointments. Thus, the progression of dementia is often marked by increasing dependence on others for help with even the most basic activities of daily living.

Alzheimer's And Other Causes of Dementia

There are several disease processes that can result in dementia. These causes include Alzheimer's disease, Lewy-body disease, Parkinson's Disease, Vascular dementia, and head injury to name a few. Alzheimer's disease is the most common form of dementia, representing approximately 75% of all cases. Alzheimer's disease is marked by a gradual functional decline, with difficulties with naming, rapid forgetting of newly learned information, and changes in executive functioning. Other forms of dementia have symptoms that overlap with those of Alzheimer's disease, but the particular pattern of impairment differs for each disease. For example, patients with Lewy-body dementia usually demonstrate fluctuating levels of function and cognition, with relatively preserved naming, spared memory storage but impaired retrieval, and behavioral manifestations such as hallucinations early in the disease process.

The clinical symptoms of dementia fall into two categories: cognitive and neuropsychiatric. Cognitive symptoms include impairments in memory, language, orientation, recognition, and executive functions. In the case above, Mrs. R.'s forgetfulness and inability to use common household items he was previously proficient with are examples of cognitive deficits.

In addition to the cognitive symptoms, most people with dementia exhibit what are called neuropsychiatric or neurobehavioral syndromes, more commonly known as behavioral and psychological symptoms. These symptoms can have a range of manifestations such as depression, anxiety, irritability, apathy, agitation or aggression, pacing, sleep disturbances, hallucinations, paranoia, and delusions. Apathy and social withdrawal are often apparent early in the disease course and become increasingly common with disease progression. In the case above, Mr. R first demonstrated apathy and decreased interest in social activities, and went on to develop anxiety, irritability, verbal outbursts, and pacing; these are examples of neuropsychiatric symptoms.

It is very common for patients with dementia to have one or more neuropsychiatric symptoms. For example, depression is seen in up to 40% of patients with Alzheimer's disease, and apathy occurs in up to 90% of patients in the later stages of the disease. Visual hallucinations are present in half of patients with Lewy-body dementia, which is also frequently accompanied by agitation or even physical aggression. Together with the cognitive symptoms of dementia, neuropsychiatric symptoms lead to an increased need for hospitalization and/or placement of patients in nursing facilities, as well as significant emotional distress and worsening quality of life for patients and their families.

Neuropsychiatric symptoms are a major contributor to caregiver burden, stress, and burnout. As a result, it is important to familiarize patients and their caregivers with both the cognitive and behavioral disturbances of dementia, as early evaluation and treatment can decrease distress by providing access to appropriate care and additional support. Patients and their families should be vigilant about identifying neuropsychiatric symptoms and voicing these concerns to physicians, nurses, and other caregivers involved in the patient's care.

Evaluation of a patient with dementia who develops behavioral dysregulation or neuropsychiatric symptoms begins with a careful appraisal of possible underlying causes. Triggers of neuropsychiatric symptoms may include confusion, noisy environments, hearing loss, boredom, loneliness, depression, pain, constipation, medical illness, or conflicts with caregivers. Even common everyday activities, such as bathing or dressing, can be difficult for patients with dementia, and may cause them to become distressed, leading to changes in behavior. Infection, certain medications, electrolyte imbalances, and other medical conditions can also lead to acute worsening of cognitive functions (a condition referred to as “delirium") and abrupt changes in behavior. Physicians may perform physical examination, blood tests, urine tests, x-rays, and other tests to rule out medical causes for behavioral changes. If a medical cause of these symptoms is identified, then appropriate treatment is directed towards the medical condition leading to the behavioral changes.

After ensuring there is no environmental trigger, medical causes or medication side effect contributing to the patient's change in behavior, other interventions are often recommended. Treatments to decrease neuropsychiatric symptoms and improve the patient's comfort and mood can be as simple as redirecting the patient's focus, increasing social interaction, initiating enjoyable activities, and eliminating sources of conflict. Establishing routines and providing comforting stimulation, such as the patient's favorite music or films, can be beneficial in decreasing agitation. Creating a daily schedule that is posted in the home, keeping window curtains open to ensure the patient is oriented to time of day, and scheduling regularly timed meals can increase the patient's comfort and decrease the risk of disorientation and behavioral symptoms. As a caregiver, learning strategies to modify your style of interaction with patients to minimize neuropsychiatric symptoms may help decrease your own level of frustration and distress.

When neuropsychiatric symptoms persist in a severe and disruptive manner despite environmental modifications and treatment of contributing medical problems, the use of psychiatric medications may be considered. It may be possible to reduce some of these symptoms, but they may not always be completely alleviated with medications. The goal of treatment is often to decrease psychotic thinking to a point where the patient is not distressed by his/her thoughts or at risk of harm to self or others, rather than completely removing the delusional thinking. Agitated behaviors become an appropriate target of treatment only when patients exhibit symptoms severe enough to impair their functioning, interfere with the provision of care, or raise the chance of injury. In such cases, patients may be tried on psychiatric medications in order to protect the patient and their caretakers. Antidepressants, antipsychotics, mood stabilizers or cognitive enhancers may be tried depending on specific behavioral syndromes. It is important to remember that the potential risk (side effects) of these medications has to be carefully weighed with the anticipated benefits.

The Challenges Of Caregiving

It can be very challenging to care for a loved one with dementia who develops neuropsychiatric symptoms – even with simple, everyday and mundane tasks like eating. It is important to reach out to health care providers, both for the individual with dementia as well as for yourself, in order to ensure the physical and mental health of both caregiver and receiver. Many resources are available online and locally which may be useful in helping you care for your loved ones. For example, the Alzheimer's Association is a nationwide organization devoted to research on Alzheimer's disease, as well as to directing patients and their families towards local caregiving resources. More information about the Alzheimer's Association can be found at: http://www.alz.org/. The National Institute of Mental Health is another nationwide organization devoted to the treatment of mental illness, including dementia, which can be useful for identifying treatment directions, and for assisting caregivers with supportive resources. More information about the National Institute of Mental Health can be found at: https://www.nlm.nih.gov/medlineplus/dementia.html 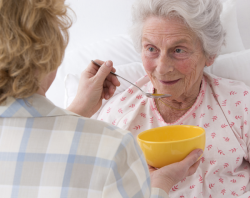 The Best Foods For Dementia Patients